Posted at 16:34h in by Citrus Studios 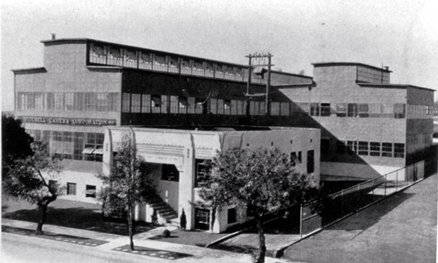 The Mitchell Camera Corporation constructed this motion picture camera factory in 1929 to service the film industry in Hollywood and beyond; an industry which it eventually dominated. By 1946, 85% of all motion pictures shown in theaters worldwide were filmed with Mitchell cameras produced at the factory, and the company received Academy Awards for Technical Achievement in 1939, 1966, and 1968.

Following the departure of the Mitchell Camera Corporation in 1946, the building achieved importance in the LGBTQ history of West Hollywood. From 1967 to 1971 it was The Factory, a nightclub popular with celebrities. In 1974 that it became the disco Studio One, an epicenter for gay nightlife and activism. In the 1970s and 1980s, the club was an important space where gay men could be open and proud about their identities. It drew gay icons such as Joan Rivers and Liza Minnelli. And it hosted some of the country’s first AIDS fundraisers, before closing in 1993.

Continue north on Robertson Boulevard to the end of the block. Turn right on Santa Monica Boulevard and walk one block to the intersection of San Vicente Boulevard.

The Mother Lode, located in 8944 Santa Monica Boulevard, has been open since 1979, making it the oldest gay bar in West Hollywood that is still in business. In the 1960s it was a restaurant and bar called the Por Favor, which was frequented by Judy Garland.

We have now returned to the tour starting point at the intersection of Santa Monica and San Vicente. We hope you’ve enjoyed your journey back in time to the town of Sherman. You’re now perfectly situated to take advantage of all the galleries, cafes, bars, showrooms, and boutiques that can be found along Santa Monica Boulevard, and on Melrose Avenue to the south, Sunset Boulevard to the north, Robertson Boulevard to the west, and La Cienega Boulevard to the east.