Posted at 17:48h in by Citrus Studios 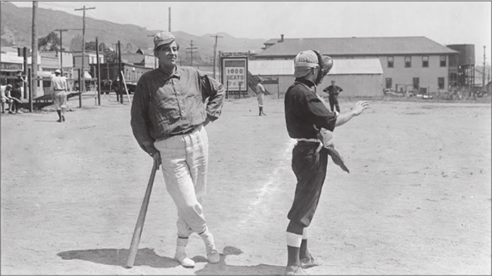 Look across the street at the brick sheriff station. This was the site of Sherman’s baseball field, where the silent film Casey at the Bat was filmed in 1913. On the left side of the photo you can see the businesses along Santa Monica Boulevard. 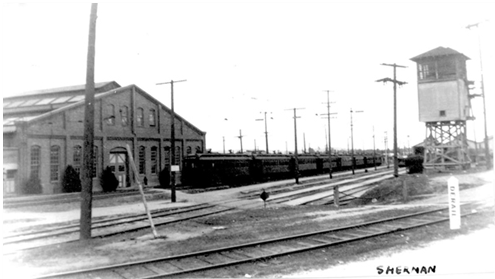 In 1896, Sherman and Clark purchased this 5.5 acre site and established the operating headquarters for the Los Angeles Pacific Railway Company, later acquired by the Pacific Electric Railroad. Here converged the main rail lines from Downtown Los Angeles through Hollywood, to Sawtelle, Santa Monica, Venice and others. By July 4, 1896 the first electric trolley car was operating from this site.

The origins of West Hollywood are intricately related to the railroad, in general, and the Sherman Yard, in particular. Although it was Henry Huntington who built the Pacific Electric Railroad into the largest electric interurban streetcar system in the world, Sherman played key roles in the early history of this system, which profoundly influenced the development of Los Angeles.

The Pacific Electric System was dismantled after World War II and as a result, this rail yard and its behemoth barns were demolished by the mid-1950’s, and eventually replaced by the Pacific Design Center.