Posted at 16:53h in by Citrus Studios 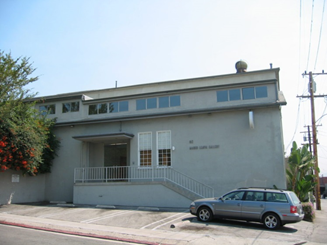 At the corner of Robertson Boulevard and Keith Avenue is 812 Robertson Boulevard, home to two West Hollywood icons; the current  MARGO LEAVIN GALLERY and the past TONY DUQUETTE STUDIOS. Built for the lace factory of Cornelius and Edith Cristoefelles, the building is reputed to have been the sound studio for Norma Talmadge but as she never had a studio of her own, was probably only used for a location in a film. In 1932 it housed the Beverly Hills Water Bottling Company. In 1956, Tony Duquette took over the building for his studio. He was multi-talented and worked in various artistic mediums and design professions, as well as being a painter, sculptor and costume, jewelry, film set, and interior designer. He used the space until 1970, when Margo Leavin opened her art gallery. The gallery is known as a bastion of cutting-edge contemporary art, presenting 500 shows by mostly New York and L.A. based artists such as John Baldessari, Alexis Smith, and William Leavitt.

Turn left on Robertson Boulevard. Cross Santa Monica Boulevard and look at The Abbey across the street.